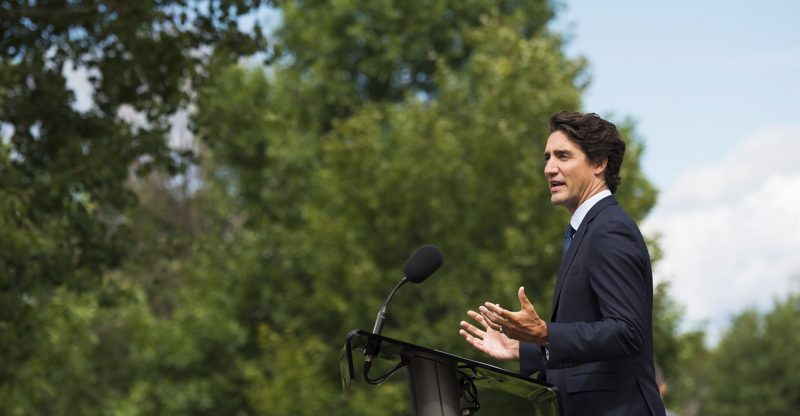 As Prime Minister Justin Trudeau’s first official visit to China nears, a new poll revealed that the number of Canadians in support of the idea of a free-trade agreement with the country’s second-largest trading partner is on the rise.

On the other hand, the poll also discovered that fewer Canadians perceive the human-rights situation in China is bettering, with more than half willing to forgo economic opportunities in Asian countries due to human-rights concerns.

The poll was funded by the Asia Pacific Foundation of Canada and carried out by EKOS Research Associates. It assessed 3,526 Canadians within a three-week period in June and July, with a margin error of plus or minus 1.6 percent.

The poll highlighted that 46 percent of Canadians would back a free-trade agreement with China, going up from 36 percent in the foundation’s 2014 report. 46 percent would oppose such a deal, a decrease from 50 percent two years ago.

In a poll carried out for The Globe and Mail by Nanos Research earlier this year, 41 percent of Canadians said they would advocate or somewhat advocate for a free-trade agreement with China.

The poll also found 47 percent of Canadians would oppose or somewhat oppose such a deal.

Anonymous sources said that there will be “no movement” in the direction of a free-trade agreement during the Prime Minister’s trip.

According to federal officials, the Canadian public is skeptical about China’s readiness to abide by the rule of law, including its transparency in business matters.

Also, 76 percent of Canadians were seen to have a negative or somewhat negative perception of the Chinese government.

76 percent of those polled for the Asia Pacific Foundation maintained that Ottawa ought to raise human-rights issues with Asian countries. 35 percent stated that the human rights condition in China is getting better, a decrease by four points from 2014.

51 percent mentioned that they are ready to miss out on commercial opportunities, to an extent, in Asian countries due to human-rights problems.

Eva Busza, vice-president of research and programs at the foundation, asserted that in some way, Canadians seem to be growing a more positive view of Asia.

She added that the poll saw 48 percent of Canadians believing Asia should be the country’s foreign-policy priority, up from 37 percent in 2014. 49 percent saw China’s growth as an opportunity, an increase from 41 percent.

Moreover, 50 percent stated that they could perhaps be persuaded to encourage a closer economic relationship with China should more information be made available; 20 percent claimed that they were already in support.

“I think this poll suggests the Canadian public is taking a more nuanced approach to Asia,” she said in an interview.

The Asia Pacific Foundation has been in the business of commissioning such polls for 12 years, although the 2015 poll had a different focus and smaller sample size. According to Busza, the 2014 poll made a far better comparison to the 2016 poll.

Director of the institute of Asian Research at the University of British Columbia, Yves Tiberghien said he was amazed by the number of people who trusted Asia should be the priority in the issue of foreign policy.

“Incrementally, Asia is going to be more and more important,” he said in an interview. “… I think they got that right.”

Aside from his work at UBC, Prof. Tiberghien is a senior fellow at the Asia Pacific Foundation and revealed that he had been consulted during the drafting of the survey questions.